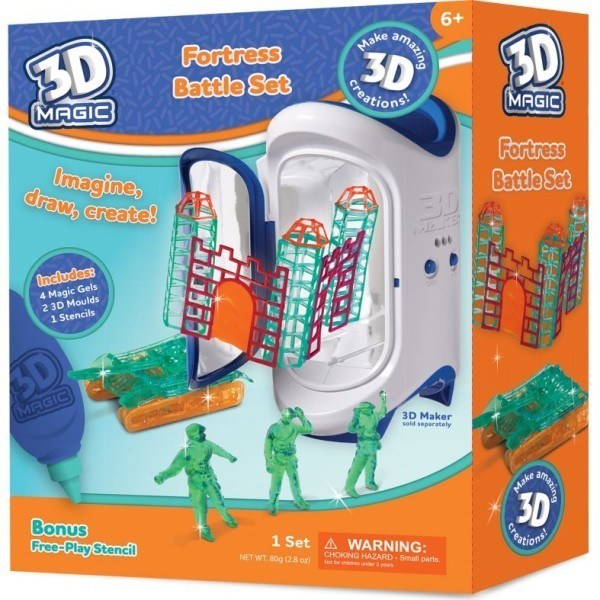 Moulds, stencils and gel for use with the 3D Magic 3D Maker Set.

This set does not include 3D Maker Creation Station, which is only included in the 3D Magic 3D Maker Set.

The 3D Magic Fortress Battle Set includes four 3D gels, as well as moulds and stencils to create a fortress, tanks and soldiers.

Children are able to make their 3D creations in four simple steps.

Step 1: place coloured UV gel into a mould.
Step 2: place the mould into the UV Creation Station for 10 seconds to cure the ink (Creation Station is not included in this set)
Step 3: take the plastic pieces out of the mould.
Step 4: build a 3D creation by connecting the pieces together, using the gel as a glue.

Need the 3D Maker Set. (which includes the Creation Station), or more gel? Check out our 3D Magic brand page.

Ages: 6+ (according to manufacturer)

There are no reviews yet.

Only logged in customers who have purchased this product may leave a review.

Please note that we are now closed for the Christmas and New Year period. You can place an order however it will not be dispatched until 8 January 2020. Best wishes for the festive season.
Toogle Down

Please feel free to contact us with any questions you may have.

Or use our Contact Form.
Also see our FAQs.

Same day despatch if you order before 12:30pm (Melbourne time) on a business day.